The Delhi Startup Policy envisages the emergence of Delhi as a Global Innovation Hub and the most preferred destination for Startups by 2030. The creating an enabling ecosystem for an innovation-based economy and fostering entrepreneurial spirit through a robust support mechanism. The Dialogue and Development Commission (DDC) of Delhi led the primary and secondary research, wide-ranging consultations and comprehensive advisory on the policy since 2019.

The research team at DDC Delhi began its in-depth, in-person, one-on-one meetings with startup founders in the NCR region to better understand the challenges faced by them in their journey so far, the potential role of policy interventions in promoting entrepreneurship in the region and existing advantages that Delhi offers to startups. The meetings were curated to ensure that startups of various high growth sectors, such as EdTech, FinTech, SaaS, HealthTech, AI and ML, D2C Platforms etc. and at various stages of growth - Early-stage, Venture-Funded (Growth) Stage and Late Stage were consulted in the first phase of the policy research.

Next, industry associations, including TIE, FICCI, CII, GAME and NASSCOM were consulted to present their learnings of the Delhi startup ecosystem and suggest interventions that were required to make Delhi a Global Innovation Hub. A number of relevant reports and studies were also shared by the industry associations which helped shape the policy. A separate series of consultations were carried out with angel investors and venture capitalists to understand the gaps in the Delhi startup ecosystem from their lens. DDC Delhi arranged for an industry consultation with CM Arvind Kejriwal in August 2020 where the discussions were focussed around industry-academic partnerships, entrepreneurship training programs for young professionals and making Delhi’s physical infrastructure more conducive for startups to work.

The Government of National Capital Territory of Delhi had launched an incubation policy in 2016 under which 11 incubators had been set up across GNCTD Universities such as IIIT Delhi, DTU, IGDTUW etc. DDC Delhi invited CEOs of these incubators and relevant eminent academics from other universities located in Delhi to submit their recommendations for the Delhi Startup Policy. Through these recommendations, a deeper understanding was developed regarding impediments in the curriculum and culture of higher education in Delhi. Detailed interactions with student entrepreneurs at these institutes highlighted the desired changes required to realize their entrepreneurial ambitions.

In parallel to consultations with stakeholders, a dedicated team at DDC Delhi brought forward best practices from existing innovation hubs such as Silicon Valley, London, Israel etc. Serial entrepreneurs from these regions were interviewed to understand the reasons behind the growth of these innovation hubs. Successes and failures of existing state and national policies on innovation and entrepreneurship in India were also studied in detail by engaging with those individuals who had been part of policy formulation and implementation at the national and state level.

While drafting the final policy, focus was kept on solving for what the startup industry really needs. To ensure this spirit is carried forward in implementation, a startup task force has been kept at the heart of the policy which will comprise mostly representatives from the industry and academia and only 5% of the task force will be government officials. The task force will be responsible for recognising startups, finalizing guidelines for incentives and monitoring the success of the policy interventions. DDC Delhi is tasked with assisting the nodal agency in finalizing the members of the Startup Task Force.

The Delhi Startup Policy 2022 was approved by the Cabinet on 5th May 2022. VIa the incentives and initiatives outlined in the Delhi Startup Policy, The Government of National Capital Territory of Delhi aims to achieve an ambitious target of encouraging, facilitating and supporting the emergence of at least 15000 startups by 2030. 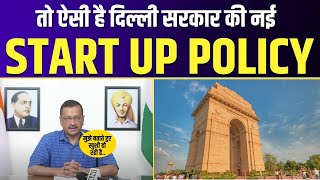