DDC Delhi, in collaboration with RMI India, co-hosted the ‘National Consultation on Delhi Solar Policy’ on May 12th, 2022 to frame Delhi’s new solar policy. The consultation aimed to align relevant stakeholders in the solar energy ecosystem on a shared vision for Delhi’s solar targets and to establish a clear set of actionable next steps to make Delhi the national and global leader in rooftop solar adoption.

The Delhi Government presented a unique Rozgar Budget this year wherein a new solar policy has been envisaged with the objective of increasing the installed capacity of rooftop solar plants so that they can fulfill 10% of Delhi’s annual energy demand. The plan will also contribute to the creation of 40,000 new green jobs in this sector.

The policy consultations organised regularly by the Delhi Government have enabled us to gather a lot of valuable feedback from the stakeholders for formulating a new, effective, exemplary, and robust solar policy for Delhi. Many buildings in Delhi are old and require reconstruction – thus there is a need for re-installing/ transferring the solar panels once the new building is completed. The Delhi Government will explore the empanelment of credible RTS developers to provide continuous maintenance and the promotion of the RESCO model to ensure the proper functioning of the solar panels.

Providing generation-based incentives is better than capital incentives, and the government should only adopt the RESCO model while we can figure out additional demand aggregation strategies for private installers. We need to figure out a way that the charging of EVs does not put too much pressure on the peak load of the grid. We can explore swappable batteries that can charge the grid during peak hours and be charged during low-demand hours. There needs to be more awareness that installing rooftop solar will not ruin your terrace space as you can explore putting the elevated solar panels (at a height of 8-9 feet). That space can then be used for recreational activities as well. One can also explore installing solar panels on land on the outskirts of Delhi to generate power and income.

Sustainability is a key and constant aspect of the Hon’ble CM Sh. Arvind Kejriwal’s vision for the future of Delhi. Delhi has emerged as an environmental leader by becoming the only state to shut down all its thermal power stations; transitioning its entire industry to clean fuels (PNG); becoming the undisputed national leader for EV adoption, etc. We aim to draft a benchmark Delhi Solar Policy that is all-inclusive and sets an example for others to follow so that Delhi emerges as a sustainable, modern and global city.

By putting collaborative problem-solving at the heart of Delhi’s model of governance, the Hon’ble CM Sh. Arvind Kejriwal’s vision has changed the nature of policy making. The success of Delhi’s progressive electric vehicle policy is an example of how various barriers can be addressed through regular consultation with all stakeholders and incorporating their feedback throughout the various stages of policy design, implementation, and course correction.

DDC Delhi and the Power Department collaborated to consult with various national and international experts and develop the landmark Delhi Solar Policy 2016. It was the first time that any state policy gave space to progressive concepts like VNM and GNM in its policy. The new solar policy will take this movement forward so that Delhi can become the solar capital of India and, hopefully, become a global case study for how cities can lead the rooftop solar movement.

The Delhi Solar Policy 2016 was formulated with the target of achieving 1995 MW rooftop solar installation by 2025. Installation of solar panels on the rooftops of government buildings with an area of 500 sq. m or more was made mandatory. The scheme provided for group and virtual net metering with the intention of extending the benefits of solar power to even those sections of the population that were unable to install solar panels. Generation-based incentives were also provided for INR 2 per unit of solar generation for a minimum of 1100 units per KW per year to domestic and residential consumers.

With the new policy, we should aim to install solar panels on the rooftops of all government buildings and encourage all individual house-owners, cooperative and group housing societies, owners of industrial and commercial units, etc. to install solar panels on their rooftops and increase the contribution of solar power to more than 50% of Delhi’s energy basket by 2030. The Power Department is also formulating a vision document for inclusion in the Master Plan of Delhi 2041, which focuses on a mass shift to renewable energy and discusses strategies to significantly increase the share of renewable energy, particularly through the adoption of solar power in Delhi. The vision document would emphasise sourcing at least 80% of the new power tie-ups through renewables by providing solar panels on agricultural farms, canals, government buildings, residential houses, highways, public utilities, etc.

Unleashing the true potential of solar energy requires a significant scaling up of India’s rooftop solar capacity. Promoting rooftop solar is the first step in transforming consumers into producers of electricity and making them an active part of the energy economy. This convening attests to the Delhi Government’s willingness and ability to listen to and incorporate feedback from different stakeholder groups towards enhancing the city’s leadership in solar deployment and clean energy transition. With the increasing number of electric vehicles (EVs), we can witness for ourselves the success of Delhi’s progressive policies on the roads of Delhi. Our ambition is to see success on the roofs of Delhi as well.

DISCOMs have a huge opportunity to potentially lower their average power purchase costs, which are rising by the day; REC costs; transmission and distribution losses; and rooftop solar also helps them avoid investments in generation capacity, transmission charges, and distribution costs. For governments, it means the creation of local green jobs, increased security and reliability of power, and actionable climate commitments. The opportunity that rooftop solar provides as a distributed renewable source is not only beneficial to the decarbonization efforts of the power sector, but it also lends us the huge opportunity of decarbonising many other sectors of the economy. For consumers, it helps in reducing their reliance on grid electricity consumption, lowers their electricity costs by opting for lower tariff plans, and gives them an opportunity to create additional income. 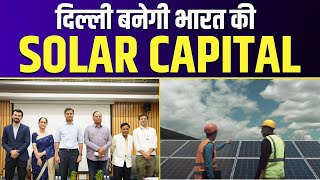